Range Anxiety: How Far Will an Electric Car Travel on a Full Charge?

“Range Anxiety” - it’s a relatively new expression to describe a phenomenon only associated with the terror of your electric car running out of electricity.

And, emptying your battery isn’t like running out of petrol either. You can’t just phone a friend and ask them to bring a jerry can full of fuel to help you out, if you drain your electricity reserve, you need to be recovered to your nearest supply.

With that in mind, we’re all curious as to how far electric cars will really go on a single charge, in the real world, on UK roads.

We’ve just put a 2012 Nissan Leaf (  https://www.mountbattencarsales.co.uk/used-nissan-leaf-wotton-under-edge-gloucestershire-2696642  ) onto our forecourt so it is an obvious choice for our comparison.  We also know people who’ve driven the Hyundai Kona Electric and Volkswagen e-Golf so we chose those for our comparisons.

The main reason that we wanted to write about the electric cars is because we're working to increase the number of electric and hybrid vehicles in our stock so are working hard to understand them to be sure we can help our customers choose wisely.  We are constantly asked about vehicle range and running costs.  Official ranges are notoriously untrustworthy - they don’t take into account real world applications.

Manufacturer’s are known to (allegedly) overstate the performance of their vehicles...

...and, the tree huggers making the electric cars apparently are no different.

The Volkswagen e-Golf is officially capable of 144 miles between charges. The official mileage range of the Nissan Leaf is 168 miles, while the Hyundai Kona Electric has the biggest battery of the three, with an official rating of 279 miles.

Generally speaking, in real terms, electric cars deliver around 85 per cent of the range compared to what manufacturers claim they can do.

Electric car range: how far did they go?

In some recent comparisons, three different cars were used to measure what the range of an electric car is in the real world. These comparisons were not meant to reflect how an electric car is used for most of its time, but how well it would perform on medium to long-distance journeys that might only be occasional, but are still a big concern of the public, and one of the main reasons more people aren’t purchasing electric vehicles. 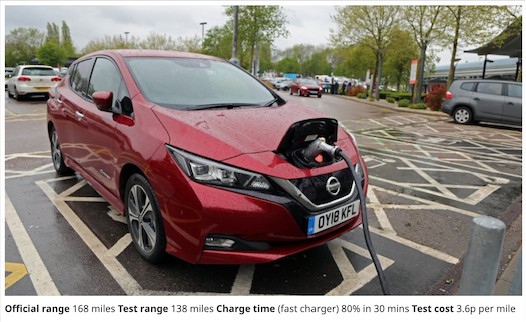 For the comparisons (aka - unscientific testing) the journalists drove a Nissan Leaf from South Mimms Services, to inner city Birmingham, which took four hours, then went to Corley Services in order to refill. Travelling from (just outside of) England’s first city to its second is roughly what Nissan says the Leaf will travel at mixed speeds.

First up, you need to take into account charging times if your journey is further than the range of the car. Using fast chargers, the Leaf can get to 80% charge in around 30 minutes. This is impressive - but you won’t be getting those speeds from your three-pin or home charger.

Our test journey from South Mimms Services on the M25, to the central Birmingham location was 108 miles. It was an additional 22 miles from Birmingham to the next charging spot at the Corley services on the M6. From 100% at the South Mimms Services, we arrived at Birmingham with around 30 miles left. We arrived at Corley services with 8 miles indicated as remaining in the metaphorical tank. This means that we travelled 130 miles on a single charge, with a theoretical range of 138 miles.

The Leaf was used in real world conditions - driven on the A1 at rush hour, and at speeds varying between inner-city and 70mph, with the radio on, and heating intermittently used. Nissan’s real-world figure of 168 miles at motorway speeds is probably achievable at relatively low speeds and with minimal power being sapped by electronic items in the car - but using it in an everyday way, it’s not quite capable of completing 168 miles.

£5.04 is all it cost to travel from South Mimms Services to Central Birmingham to Corley Services. Charge lengths, times, prices, and even power can change depending on car/range/power sources, but Ecotricity cost 30p per kWh. At 138 miles that works out at 3.6p per mile. To put that into context, Britain’s best-selling car, the Ford Fiesta, will have roughly cost £17.61 to travel the same distance. 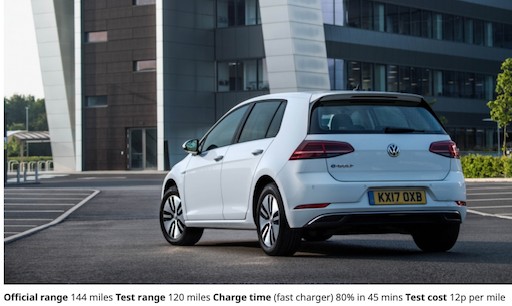 The Volkswagen e-Golf officially has a range of 144 miles, but the company accepts publicly that in real-world driving conditions, that figure is closer to 120 miles. Of course, like any discussion of range and/or economy – whether in an electric vehicle or a car powered by an internal combustion engine – that all comes down to the driver.

For example, motorway journeys don’t necessarily have to induce range anxiety in electric vehicle drivers, as maintaining a steady pace using cruise control can certainly see that 120 miles exceeded. On one trip, from the Cotswolds to London – a distance of around 110 miles – mostly using the M4 and maintaining a constant 65mph (along with a section of slower speed when congestion struck) enabled us to get home with 40 miles of range remaining, meaning a theoretical 150 miles. Driving at 65mph on a British motorway is certainly an unusual experience – almost the only other vehicles you overtake are lorries – but the silence of an EV somehow enables you to attain a calm, almost zen-like state. If you can maintain this kind of speed, however, you should be able to attain somewhere in the region of five miles per kilowatt/hour.

Driving at 60-65mph on the motorway might maximise your range, but sometimes you want to feel that you’re making progress. The e-Golf can certainly cope with driving at more usual motorways speeds – but if you do opt to drive at a ‘normal’ motorway speed, the range does fall pretty quickly (you’ll be going at below four miles per kilowatt/hour) and you can expect to get somewhere in the region of 80 miles before the warning light comes on, telling you that comfort functions are restricted.

The e-Golf uses a different charger than the Leaf: instead of the Nissan’s CHAdeMO charger, the e-Golf has a Type 2 charger that uses AC power. In most regular fast 7kW chargers (which aren’t that fast) that means it takes about five hours for a full charge. There are also 43kW rapid chargers on the motorway, but the e-Golf can’t take advantage of those and still only charge at 7kW. This is something that you’ll only discover in the small print, which could catch you out if you turn up at one of Ecotricity’s Electric Highway chargers at a motorway service station. Instead of an 80% charge in 45 minutes, you’ll receive less than 20%.

In order to get an 80% charge in 45 minutes or so, the e-Golf needs a 50kW DC CCS (Combined Charging System) rapid charger. Ecotricity offers these, as do other public charging suppliers such as Polar, Instavolt and Charge Your Car.

For day-to-day off-street charging on the Source London network, those with a membership (which costs £4 a month) will pay 29.1p per kWh, with a full charge for the e-Golf costing in the region of £10 and taking around five hours. 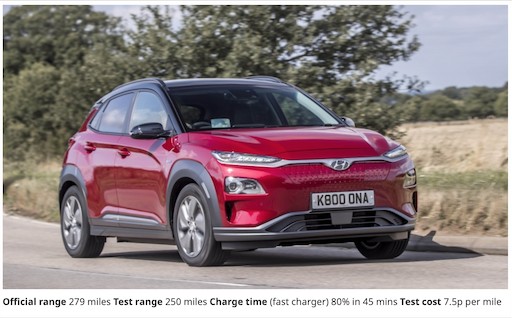 Also included in the testing was the Hyundai Kona electric. It was used a couple of times on shorter journeys, with one longer run undertaken as part of a challenge that the carmaker set motoring journalists. Set with the task of reaching a choice of various checkpoints around the country, at which they could earn additional points, before heading back after 14 hours to their original starting point and earning more points for the amount of range remaining, the Kona performed incredibly well.

Hyundai says that the official range is 279 miles and the early hours of our drive, without being overly careful about the range, the driver was on course to get close to that. Speeding up on motorways reduced the range at a faster rate (between 4.3 and 4.6 kW/h), but it was still an impressive range that should eliminate range anxiety among owners.

The Kona was charged twice on it’s test (Ecotricity and Charge Your Car), taking on a total of 72.8kWh, which cost £20.11. The Kona variant used has a 64kWh battery, which is larger than the Leaf’s 40kWh and the e-Golf’s 35.8kWh – and which accounts for its greater range. But as a larger battery, it will take longer to charge and cost more: but it will get you further. When a new generation of 150kW chargers starts taking root in the next few years – at BP filling stations, for example – charging times will start to come down considerably (but costs might not: they will be expensive to build, so the driver will have to pay more for the quicker service).

It’s also worth noting that for those electric vehicle owners with off-street parking, who can install a charging unit in their garage or drive at home, the cost of charging can work out to be considerably cheaper. Friends with an e-Golf at the same time as we were doing our comparisons, who have home chargers are spending anywhere between a quarter and a half of the cost of public chargers: one quoted 7.2p per kWh at night or 15.7 per kWh during the day. It's an inexact science – there will be variations in electricity tariffs, for example – but it does demonstrate that running an EV off a domestic supply will work out a lot cheaper than having to rely on public infrastructure.

So what does all of this mean?

Whatever way EV drivers charge their vehicles, the costs are considerably lower than filling up with petrol or diesel. And when all EVs have Kona-like ranges, and there’s no anxiety required, drivers are going to find their motoring lives not only cleaner, but also considerably cheaper.