As an innovator and early-adopter myself, you might expect me to say, “HELL NO...!”.  But incremental tinkering that adds very little to our lives isn’t time well spent. Innovation can be good in the right circumstance but innovation can also be glitchy and it can be tragic.

The two recent Boeing crashes are a strong case of innovation gone tragic. Even Donald Trump was prompted to weigh-in on the second Max-8 air crash by tweeting: 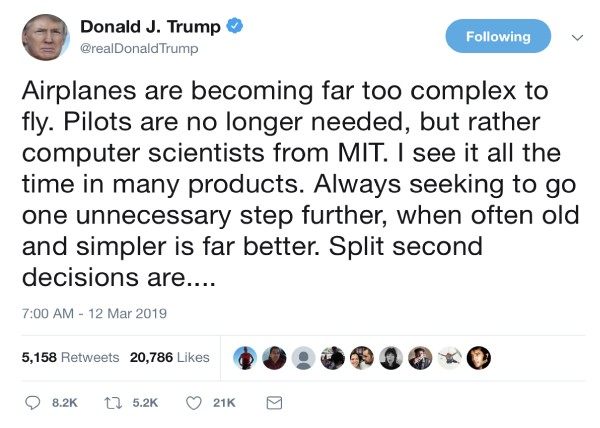 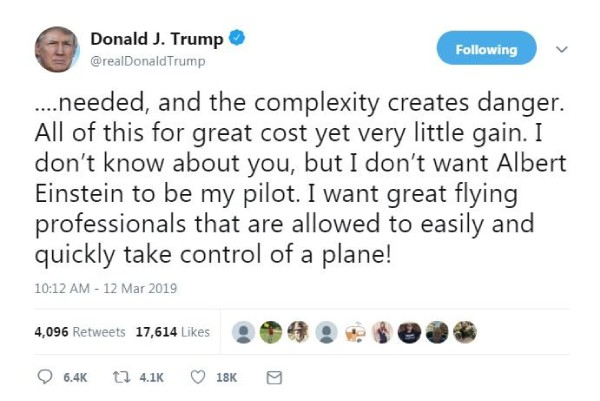 And, who’s better at being old and simple?

TV pundits were all over the Trump tweet saying Trump wants to go back in time to our racist past.

OK, he does want that.

But this isn’t about Trump.

As my dear old mother always says, “Sometimes a cigar is just a cigar”.  (Actually it was Sigmund Freud - but I’m not going to tell her that, are you?)

...and I think The Donald is right this time. We do over-engineer stuff all the time and designing a plane where the auto-pilot software sometimes steers itself into the dirt is just the most tragic example.

Another less tragic but very frustrating example is what they’re doing to vape technology. The new PAX vape device doesn’t have a mouthpiece. Which is an odd thing to get rid of for something you stick in your mouth. You can’t suck it and that sucks. 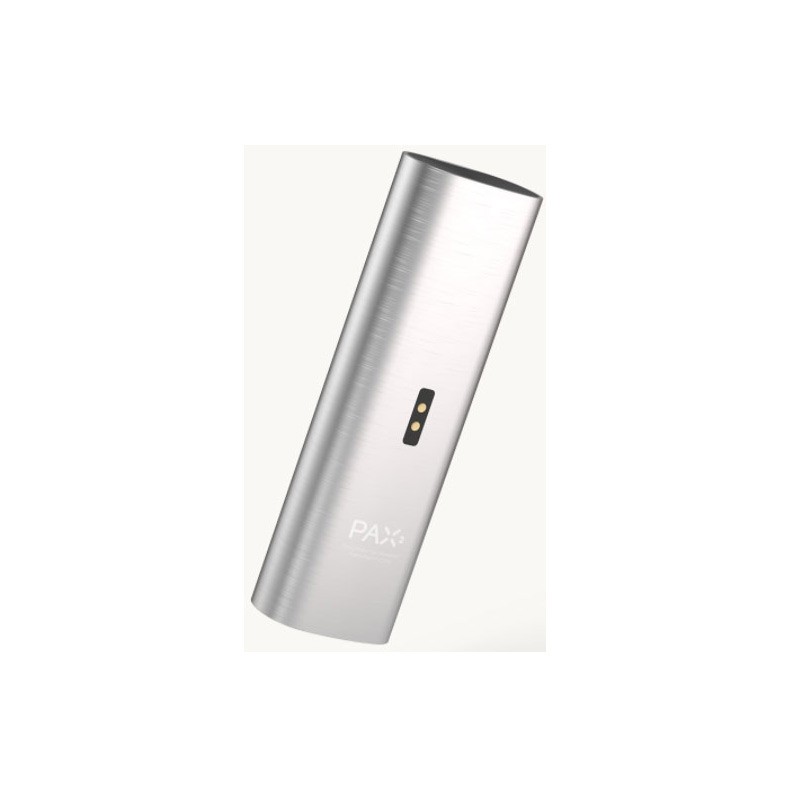 This is what I call “Reverse Improvement”. Making an upgrade that nobody wants, needs or likes.  They do it with Bluetooth headsets:  Press 5 times to pair your device. Press 3 times to set the clock, Press and hold 5 seconds to turn off...

Listen, I’m on earth to have a good time, not to read instructions manuals. The last thing I want to waste time doing is figuring shit out.

And, don’t get me started on the motor trade; cars these days have more useless features than Boris Johnson.

How did Mercedes improve our lives by hiding the gear selector in another handle on the steering column? They didn’t.  Now we have four control handles where there used to be just one – the indicator. 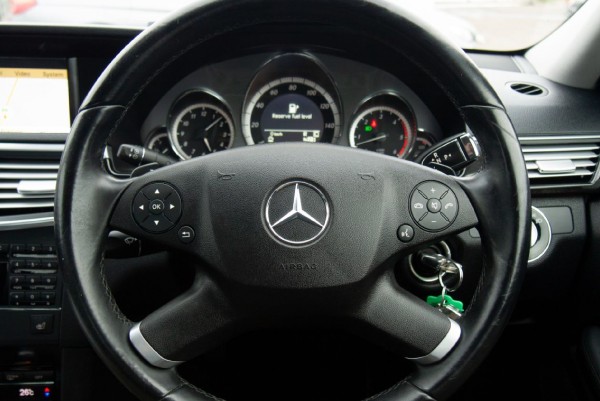 It’s not better if everything in the car is run by a computer because it is always glitchy.

Once while I was driving a voice-activated rental car I said, “Car. Turn on headlights”.

The car said, “Would you like to open the boot?”

I don’t know what is more stupid, a feature where you can verbally open your boot at 60 mph or getting into an argument with a car.

Last weekend I was in Europe.  The faucet in my hotel bathroom looked like this. 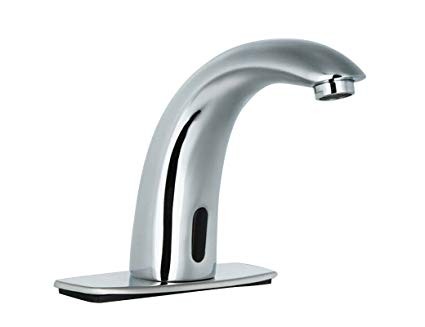 I needed hot water to wash my hands and cold water to brush my teeth.

And, I never found out how to make that happen.

The black thing in the middle makes the water go on, but hot and cold...? 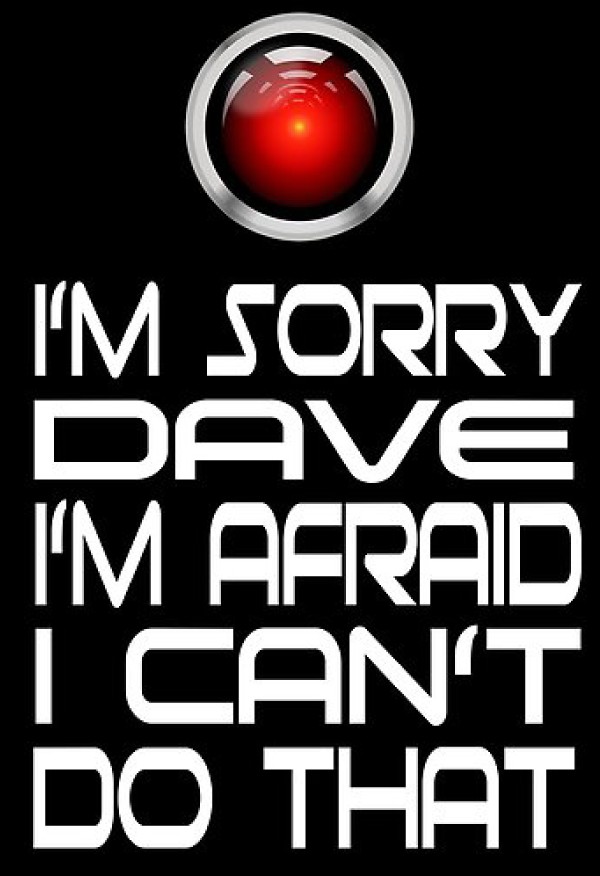 There’s even a smart toilet now. Although, if it were really that smart, would it be a toilet? 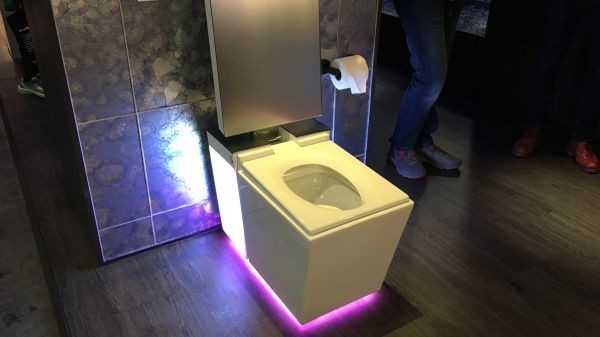 They are working on a toilet that does an analysis of your pee as it hits the side of the bowl and gives a read-out of all your vital functions. I think that’s fantastic. I’m all for REAL progress.  But that’s not the Smart Toilet.

Because, who doesn’t want to be immersed in a toilet?

I’m not kidding. It has Bluetooth, Alexa, built-in speakers and mood lighting. (I guess that’s so you can pretend you’re taking a dump in the middle of the London Playboy Club.)

In 2017, Apple unveiled “Facial Recognition Technology” because it was too difficult to remember four digits for opening your phone. What is this, an IQ test?

Craig Federighi, Apple’s senior vice president of software engineering, was preparing to show how fast and smooth face recognition was. As he held the phone up it immediately brought up the familiar manual code entry screen.

If Apple itself can’t get this shit to work at its own show, what shot do we have? There’s always a glitch.

A few weeks ago Nike ran into a problem with their new “Self-Lacing Trainers”. Yes; self-lacing...

For people who literally cannot tie their shoes and chew gum at the same time.  So, instead of tying your shoes on your own...

...you simply put on your shoes, pull out your phone, find Wi-Fi, open the app, enter your password, find the button that says <tie shoes>, close the app, return the phone to your pocket and catch up to your friends who left 15 minutes ago.

But, I digress...  We’re supposed to be talking about cars here.

So, what do I think of something like “Park Assist”.

When I was learning to drive, parallel parking was one of the fundamental skills. Now, 42 years of driving later, I’ve only ever miscalculated one or two times. I don’t see the need for inventions like Park Assist. I see the need for better driving instructors.

But today we have “Park Assist”.

OK... I will admit that this isn’t an entirely stupid invention.

We currently have two Volkswagen Tiguans in stock with the Park Assist feature so I decided to try it out.

(Buy One of our terrific Tiguans By Following This Link)

Did you know most drivers require 6 feet more than is necessary when parallel parking in order to fit into a space?

Park Assist is something that people who struggle with parallel parking find completely indispensable. It has proven to be a useful feature if you are driving around a city and trying to park in limited spaces. To be fair, even seasoned veterans of city parking can struggle when it comes to a smaller than usual space; with the added pressure of impatient drivers that don't want to wait a few moments for drivers to park.

Park Assist doesn't just help drivers avoid the trauma of parallel parking; it can also help reduce the scratches and dings that you can get on your vehicle when you are trying to manoeuvre into very tight spaces. Some drivers can park on the head of a pin when they need to, but others take up more space than is needed. Park Assist helps by easily fitting vehicles into spaces and reducing the disruption to traffic flow in dense inner cities.

Lexus / Toyota were the first to introduce a park assist feature way back in 2006. Now it is becoming more commonly available. The best is found on the Ford Fiesta, a £200 optional extra.  It is followed by:

The boffins have their sights squarely aimed at driverless cars.  Driverless cars used to be the sort of thing you’d see in sci-fi films - but in 2018 they’re becoming a reality. Autonomous car technology is already being developed by the likes of Lexus, BMW and Mercedes, and there have even been tests of Tesla’s driverless Autopilot system on UK roads. Across the Atlantic, Google is developing its automated technology far away from areas of population, and Apple is rumoured to be working with BMW on its own – probably automated – car.

Self Driving cars were announced in Popular Science Magazine way back in 1961 when they reported on the Aeromobile 35B, an air-cushion vehicle that was invented by William Bertelsen. This innovation was envisioned to revolutionize the transportation system with personal self-driving hover cars that could reach speeds of up to 1,500 miles per hour. 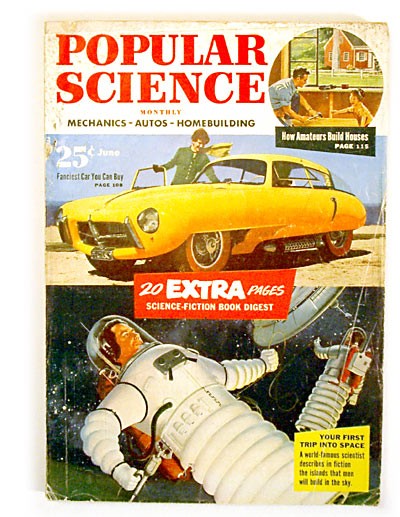 Today, 99.9% of all vehicles on the road do not have the technology to enable full autonomy. Self-driving cars won't hit our roads in a noticeable way until 2020. But by 2040, it is estimated that 95% of new vehicles sold, or 96.3 million cars, will be fully autonomous. Autonomous tech is also enjoying heavy investment around the world, especially in the UK. In 2015, the government announced new laws for testing driverless vehicles on our roads and, with them, an unprecedented £20 million investment into the technology estimating it as a £3 trillion opportunity.

Personally, I want to drive my own car. I want to hear the throaty roar of a powerful V8.  But, times are changing and innovation is happening.  We’ll see how many driverless cars are involved in accidents. Let’s hope the technology doesn’t drive too many of them into walls or other cars.