On far too many frigid winter mornings, scraping snow and ice off your car is an unavoidable chore.  I don’t believe anyone has ever woken up in the morning and said: "Boy, I hope there's a thick layer of ice encrusted on my windshield today!"

Fortunately, we're living in a golden age when it comes to ice scrapers and snow removal tools so after reading this blog post you just might.

Some believe the best approach to dealing with an ice and snow covered car is to plan ahead and cover the windshield of your vehicle with a snow cover. These covers can be pulled off prior to your drive, whisking away the snow, and preventing ice from adhering to the glass in the first place. But, unless you check the forecast without fail, and that forecast is always accurate allowing you to know precisely when to proactively deploy your snow cover, there's a good chance you'll find snow and/or ice on your car more often than not this winter. 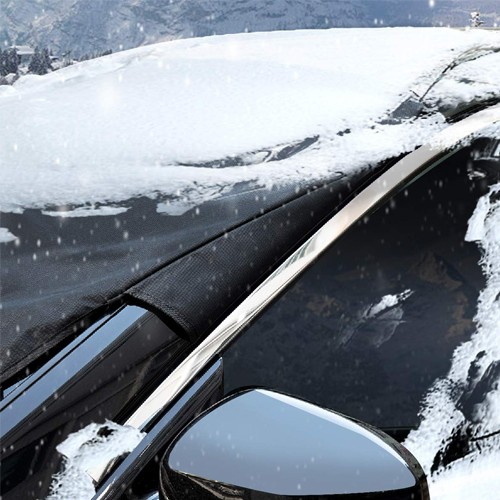 Let’s be honest with ourselves. When we arrive home we probably have at least two trips worth of items to carry into the house and we will almost certainly try to carry everything in a single trip.

Why do we juggle so much?

To avoid any more time than necessary outside in the cold, of course. With that in mind, is it really likely we’ll take the time to pull a wet car cover from the boot to put it on the car before we finally get into our nice, warm house?

No. Of course not.

If you’re determined that this is the best way, one of these will set you back somewhere in the region of £5 to £15.

Other fine approaches to dealing with winter weather are to get a job where you can work from home or to save up vacation days and hit the snooze alarm after a storm. 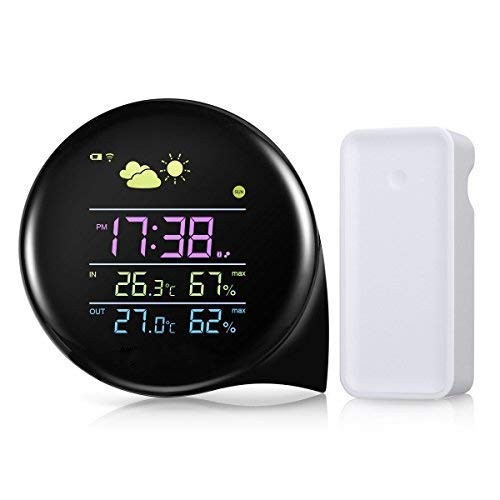 If you are like me, your region sees limited snowfall but plenty of cold mornings. In this case a simple ice scraper is probably all you need. For moderate snowfall, a scraper that also features a brush might be a good idea as these devices allow you to remove the top layer of snow and then chisel away at the ice coating on the windows.

For areas that see huge volumes of snow, you might need a larger snow broom type of device - one that's big enough to push around the snow that has piled up many inches atop your car.

I don’t like the stick with a brush on one end and scraper on the other because, while they’re not so big you have to drive around with one end sticking out the window, they are big enough that they don’t fit neatly into a door pocket or glove box and we really don’t get enough snow in England to warrant the untidiness.

As a kid growing up in Canada - the snowy part* - I spent six months of the year kicking one of these things with my giant snow boots every time we drove somewhere. They don’t fit anywhere and my boots didn’t fit around them. Is it any wonder I have deep seeded emotional issues around the topic of ice scrapers?

And, the ice scrapers on these units are usually poor. They put the “crap” into “sCRAPer”. It is difficult to get the required downforce with a giant handle in the way and the scraper part is usually poor quality.

For you lucky people with heavy snow I’d suggest an ordinary, cheap, “bought-down-the-market” brush.  Get one with soft bristles and you’re good to go. In these cases, you will probably need a two-pronged approach to your automotive snow removal process; a large broom, brush, or pushing device to remove the snow, and a good quality, smaller, hard-edged scraper to deal with the ice.

In keeping with my lifelong credo of “he who has the most toys when he dies, wins” I’m proud to say that I have a box full of ice scrapers collected over the years. I have plenty of the usual triangular, promotional ones made from brightly coloured plastic with aggressive looking fins on the back. 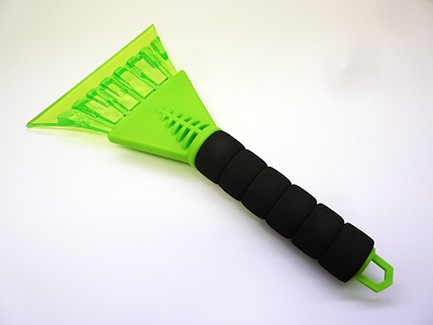 I think the fins are there to score the ice but that is clearly something an engineer had dreamed up but had never actually tested.  I don’t know why I don’t throw these out as they simply never work. Maybe I’m worried that they’ll end up strewn on our beaches along with plastic bottles and carrier bags, or worse, swallowed up by a whale or something.  That would send the tree huggers** into meltdown***. And, imagine being charged 5p for every promotional ice scraper we received.

I do carry a few Starbuck’s unloaded pre-load cards that you can swipe**** from the counter at any Starbuck’s location. 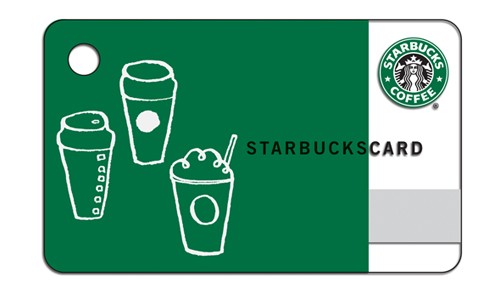 We used to have to destroy our bank cards when we were caught-out early season without any ice scraper; but not anymore. These cards have a nice sharp edge that cuts under the frost and ice and does quite a nice job.  Costa have similar. Café Nero, I think, use paper versions and these don’t work well at all.

A few years back while waiting at a Kwik Fit I discovered a box of funky looking orange curvy ice scrapers that looked like they would do the trick.  The curve allowed the scraper to fit nicely in your hand in such a way that you could put maximum energy into getting under the ice for a clean scrape first time, every time.  There was a nice soft rubber side for frost and a finely chiselled hard side for ice. £1.95 added to the invoice for tyres and balancing and I was off home ready for the cold weather.

...and, ready I was.  This little unit worked.  It worked so well that I went back to Kwik Fit and bought the entire display box of orange ice scrapers.  It sounds more impressive (impulsive) than it actually was because these little beauties were so popular that there were only two left.

Last winter when I stayed with my son and his sweetheart for a few weeks I thought it would be a nice gesture to clear the ice off the Sweetheart’s car in the morning before she drove to work.  Can you believe it? They didn’t have a single ice scraper in the house.  Nothing!

Another trick that almost falls into the “Don’t try this at home” category is to use hot water.  Put some hot tap water into the watering can and sprinkle it onto the icy windows and wing mirrors.  This is what I was forced to do under these equipment-free circumstances.  Of course it works. But, if the water is too hot or there is a crack or stone chip in the windscreen you will find yourself needing to have it replaced as the hot v. cold reaction will almost certainly turn your windscreen into an MOT failure.

I made myself a nice coffee and went on amazon in search of ice scraper technology.  I was hoping to find the orange Kwik Fit style – which I did – but the Kwik Fit style is now yellow and from Rolson.  The change in colour has not had any effect on the effectiveness of the scraper I’m pleased to report.  The Rolson version is available for £1.61 from Amazon. 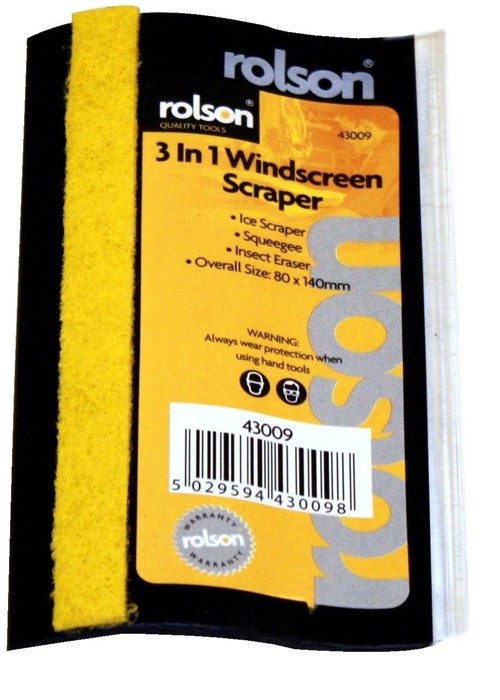 But the new technology that I found was even more amazing!

The new technology is called Ice Plane and it is awesome.  It is two fixed blades that protrude from a round cushioned handle in a triangular shape.  The construction ensures that the blades are at exactly the correct angle for maximum scraping efficiency. It allows you to put some serious pressure on the device without straining your muscles. 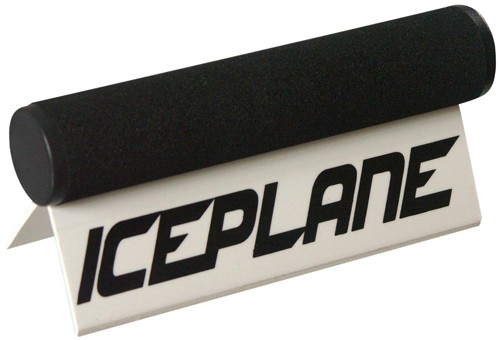 The company blurb on the product says, “[IcePlane] allows the user to apply maximum pressure to an efficient blade configuration and maintain stability and blade cutting angle whilst being comfortable in use due to natural arm alignment”.

This thing was fast and efficient and cool!

I ended up ordering three of the IcePlane, one for each of us.  I also ordered three of the Rolson (formerly Kwik Fit) curved blade.  I put one of each in each car and we were winter ready.

I went on Amazon today to find pictures of the ice scrapers I’ve mentioned and what to my wondrous eyes should appear but a whole new level of frosty fascination. Something that I’d not seen before called the Wuayi Ice Scraper.  It is a small cone inversely mounted on a larger cone that literally shovels away the ice and snow in easy motions. 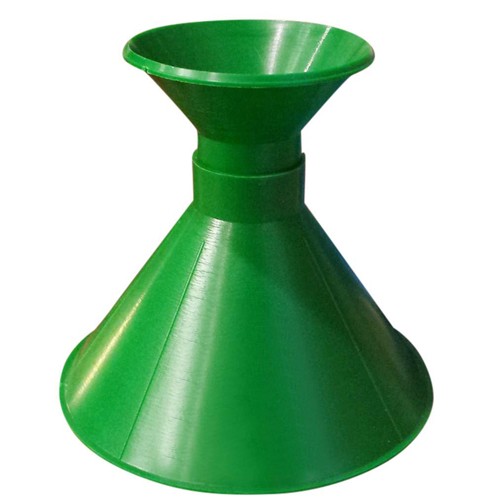 Forget the brush/scraper/stick rubbish and other low tech options.  This thing appears as if it will do it all.

I will let you know because, of course, I’ve ordered one! Actually, I ordered eight.  One as a stocking stuffer for each of the kids and their partners and one for my car and one to put into my box of ice scrapers for when I set up my ice scraper museum.

Boy, I hope there’s a thick layer of ice encrusted snow on my car today!!

* Not all of Canada is snowy but all of it is beautiful - even Toronto in its own special way.

...and now this: Now I’ve discovered the Swedish Ice Scraper. 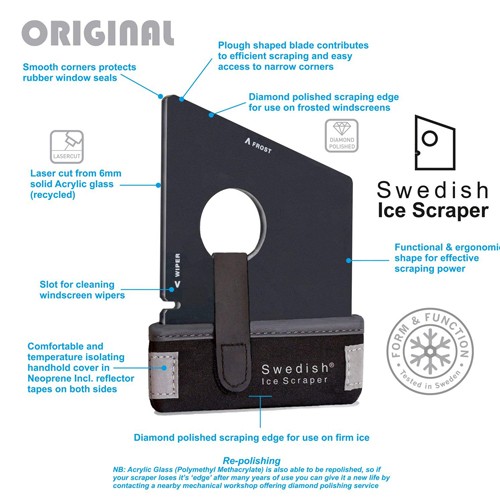 According to the Swedes, it has a “unique design developed to meet the Nordic winters. Each ice scraper is made from 6mm thick, Acrylic Glass with the edges sharpened by diamond polishing. The generous thickness (self-weight), sharp edges and an angled shaped blade contribute to efficient scraping power, including easy access to narrow corners. An ergonomic design features also a central hole for quick finger grip”.

It looks cool and I will probably buy one, but I think it is kind of like a glorified Starbuck’s card which, of course, we’re getting for free. The user would hold them the same which applies similar pressure and the edge of the card is pretty sharp. You might go through more Starbuck’s cards as they would wear out faster but so long as you’re responsible when you dispose of them, and make sure no whales swallow them, we should all be OK.